André Coyne and Jean Bellier began setting new standards the moment they met. Their first project, the Marèges Dam in France, set the tone for their future collaborations.

In 1928, André Coyne (Ecole Polytechnique - 1891-1960), left Corps des Ponts et Chaussées (French Civil Engineering Entity) and joined "Energie Electrique de la Haute Dordogne" Company (Electrical Energy Company), where he became the chief engineer of the Marèges Dam construction project. His assistant was a young engineer named Jean Bellier (1905-1986). This dam was a landmark, not just because it was the largest double-curvature arch dam of the period, but also because it introduced many technical innovations still in use today, in particular the ski-jump spillway.

Other dams were built during the 1930s, including the Aigle Dam, downstream from Marèges, which has a skijump spillway built into the roof of the hydroelectric plant. Construction was initially halted during the war and then resumed at the end of 1940, despite a shortage of materials. From 1942, André Coyne began to organize his construction workers into a Resistance network. The power plant was finally commissioned in May 1945, when the Armistice was signed.

After the war, it became necessary to have a single public electrical utility. The French government set up Electricité de France (EDF) on April 8, 1946 to ensure the production, transmission, and distribution of electricity. In 1947, André Coyne and Jean Bellier founded the consulting firm ACJB (formed from the initials of “André Coyne” and “Jean Bellier”). EDF was its first major client. At the time, France required major infrastructure, and an intense program of construction was undertaken. Colossal new dams, such as the Tignes, Roselend, and Monteynard dams, were built in France throughout the 1950s.

The firm of Coyne et Bellier developed specific measurement tools and innovative calculation and modeling techniques (the first were made of plaster). The teams led by A. Coyne also employed a method and embodied values on which Coyne refused to compromise: He demanded intellectual integrity, incorporation of structures into their environment with the agreement of all stakeholders, “striving to make savings in every area except ingenuity,” and the development of innovative solutions tailored to each need.

The firm also expanded its activities internationally. In the 1950s, it headed dam-construction projects in Jatiluhur (Indonesia) and Kariba (in the Zambezi Basin between Zambia and Zimbabwe). In the spring of 1959, André Coyne developed the first symptoms of the disease that was to take his life a year later. During that time, he also had to endure a challenging personal ordeal occasioned by the collapse of the Malpasset Dam. ACJB also helped build the Manic-5 Dam (today known as the Daniel-Johnson Dam) in Canada, which was inaugurated in 1968 and opened in 1970, the Rapel Dam in Chile, which was completed in 1968, and a number of dams on the Orange River in South Africa.

After André Coyne passed away, the firm’s employees decided unanimously to carry on with business. In addition to the arch dam technique, the consultancy engineering firm then developed embankment and rock engineering techniques. Rock engineering, which emerged from research into the collapse of the Malpasset Dam, was also used in underground projects not related to dams. In the 1970s, Coyne et Bellier was involved in EDF’s electro-nuclear program, a continuation of the work the company had started on the Marcoule reactor caissons just after the end of the war.

In 1976, the company needed an injection of capital. The new shareholders – from the Electrobel-Lesexel Group – were careful to respect the identity of the consulting firm founded by André Coyne and Jean Bellier. On January 13, 1977, Coyne et Bellier, Bureau d’Ingénieurs Conseils (Consulting Engineers), was officially founded as a limited liability company with fixed capital.

The TEF “Gas and Electricity” division went on to gain an increasingly large share of the market. In particular, it helped Storengy modernize its gas storage facilities, such as those at Chémery, and conducted studies for CPCU (Compagnie Parisienne de Chauffage Urbain) on the extension of Paris’s district heating network. TEF is also very active in the development of major regional infrastructure projects. It conducted the studies for the Seine-Nord Europe Canal for Vinci, project-managed the Musée des Confluences in Lyon in collaboration with the architectural firm Coop Himmelblau, and carried out the audit of the South Europe Atlantic High-Speed Rail Line for RFF. TEF is also a stakeholder in “cities of the future”. Along with other companies, it has carried out a mobility study on the Plateau de Saclay with the assistance of the Belgian experts at Tractebel Engineering. In 2011, the French Ministry of Industry and the Ministry of Sustainable Development awarded TEF their “Grand Prix de l’Ingénierie” (a national engineering award) for the company’s Detailed Design mission to enlarge the Panama Canal.

In the area of nuclear power, Coyne et Bellier has, for nearly 50 years, been a leading consulting firm for civil engineering work on reactor buildings of EDF nuclear plants, including containment buildings. TEF conducted the implementation studies for the EPRs at Flamanville (France) and Taishan (Chine), for EDF and AREVA respectively, and also participated in the draft proposal for ATMEA’s civil engineering works.

Finally, Tractebel Engineering France, under the Coyne et Bellier brand, is one of the world’s leading engineering firms in the area of large-scale hydraulics (dams, hydroelectric plants, and large water-conveyance projects). Its teams are currently working in some 40 countries on all project phases. Its expertise ranges from technical feasibility, economic, and environmental studies on the conveyance of water from the Red Sea to the Dead Sea, to providing technical assistance on the construction of the Gibe III Dam in Ethiopia (the world’s highest RCC dam). The Company is also in charge of the Project Management Services to convey water from the high plains of the Sétif in Algeria, and monitor the quality control of the studies and the manufacturing of the Chinese turbines used in the Jirau HPP (Brazil). The Rogun Dam in Tajikistan, the Budhi Gandaki Dam in Nepal, and the Kaleta Hydroelectric Project in Guinea have also benefited from Coyne et Bellier’s expertise.

With more than 500 employees – including over 350 engineers – throughout the world (in 2015, EUR 42.7 billion of its EUR 105.9 billion in revenue was earned in France and Monaco), TRACTEBEL (France) plans to consolidate its position as a leader in large-scale hydraulics, and to continue to expand its energy and major-infrastructure engineering activities in France. Finally, given the emergence of the cities of the future, its know-how is put to use in energy-efficiency projects. 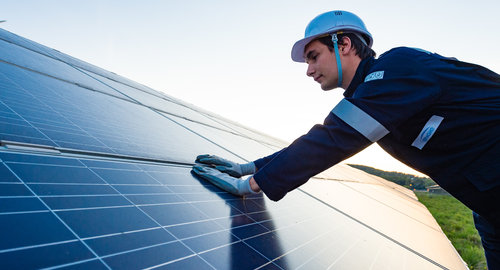 Liquefied natural gas (LNG) storage and dispensing facilities are being installed in retail gas stations in India that currently only provide diesel and gasoline. Tractebel...

Green energy in abundance: Adding 456 MW of commercial production from the Upper Tamakoshi hydropower plant to the national grid enables Nepal to generate an energy surplus...

The first wind turbine in Sudan will provide power to 14,000 people. It will also demonstrate the potential for sustainable energy generation in Africa’s third-largest...